Due to the unpredictable nature of the storm, Anthony Gutierrez of Weslaco opted for sheltering in place rather than evacuating. This decision led to an unfortunate turn of events, but (spoiler alert) it ends well for him.

Sometimes you have to mount your own rescue.  Anthony had waited patiently in his apartment for more than 10 hours for someone to help him evacuate, but he soon found himself standing in nearly four feet of water.

“I planned to wait longer for help, but being a diabetic, I needed food,” said Anthony Gutierrez, client at the First Baptist Church shelter in Weslaco. “I walked down the alley and fell three times. You can’t see through the waters that were at chest level. There were fences, but once the fences fell, there was just an open space.” 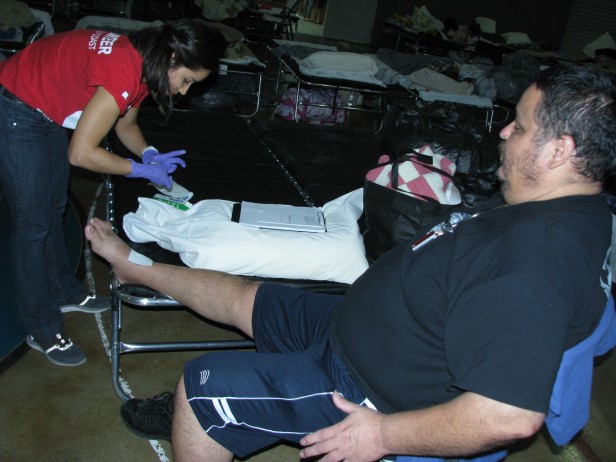 Hunger and survival instincts took over and forced him to leave his home through the back alley into the dark and cold standing waters that were now waist deep both in his apartment and surrounding his neighborhood. He made it safely out of his neighborhood and to the Weslaco City Hall, there he was able to get food and rest before being directed to temporary shelter where Red Cross staff provided him with food, shelter, first aid and medical care.

“I am thankful for all that Red Cross has done,” said Gutierrez.

To help Anthony and other people recovering from disasters please donate to the Red Cross.