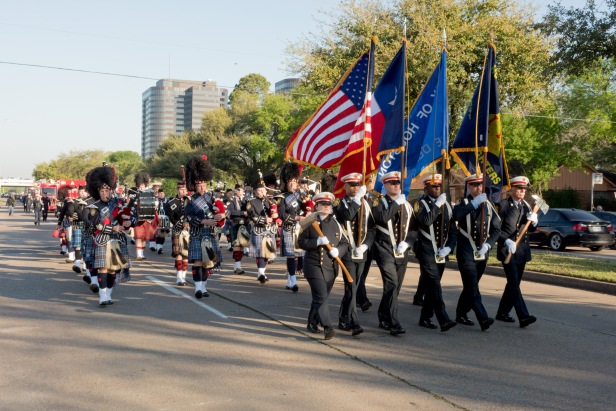 Recently, I was honored to participate in canteening with American Red Cross for the memorial service for Captain William Dowling of the Houston Fire Department. Captain William Dowling, affectionately known as “Iron Bill” was seriously injured during a fire that claimed the lives of four firefighters. That fire is still considered the worst fire in the Houston Fire Department’s history.

I did not know Captain Dowling but Red Cross volunteers work as a team with the fire department, so this was a special moment for me to be able to show my respect and support for the fire department. Hundreds of firefighters in dress-blue uniforms were in attendance. News helicopters hovered overhead as well as a Life Flight helicopter. Fire trucks were brought into position that would lead the procession along with the bagpipes.

I then witnessed one of the most awesome sights I have ever seen. The Houston Police Department’s finest, escorted Captain Dowling from the hearse to a fire truck draped in black for one last ride. It was an awesome, solemn sight. Watching this ceremony brought tears to my eyes.

Bagpipes played as hundreds of firefighters lined up in the street four deep and began their mile-long march to the church where the service would be held. The line of firefighters was several miles long and seemed like it would never end. Witnessing this parade of firefighters walking slowing, solemnly down the road for that mile-long journey was an awesome site and one I will never forget.

Just as we arrived at the church, three Life Flight helicopters flew overhead with one falling off in the missing-man routine. We watched as Captain Dowling was lifted from the fire truck and ceremonially taken into the church for the memorial service. Again, this was an awesome, solemn site and one that I will never forget.