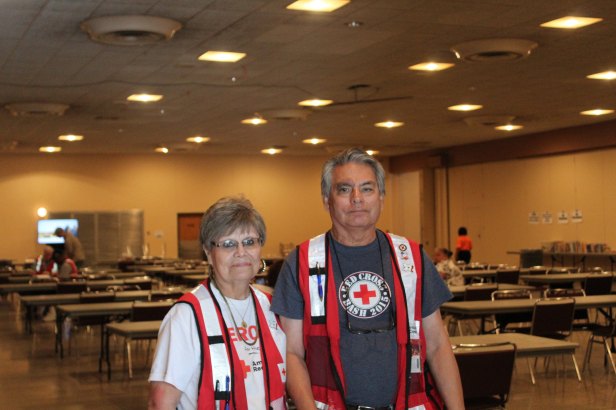 Navidad Luna and Jessie Garcia-Luna are a husband and wife volunteer team from The Coastal Bend Chapter of Texas Gulf Coast Region.  They are currently in Lafayette, LA working in the Heymann Center, where evacuees have been housed.

“When I first retired, I wasn’t sure what to do with my time,” said Navidad.

“Several people suggested that I go to the local senior citizens center to meet people and pass time.  One day while there, I met a man wearing a Red Cross shirt. I approached him and asked why he was wearing that shirt. He replied that he was a Red Cross volunteer and had just finished working on a local disaster response.”

Right away, Navidad asked how to sign up and went to the local chapter to register. Several years before, his daughter had lost everything to an apartment fire and the Red Cross assisted her during that time. Now was his turn to give back.

“During one deployment over the holidays, I decided it was time I join him. I went to the computer, signed up and started taking volunteer training classes right away,” said Jessie.

Jessie had been a 19 year volunteer at a local school and was unsure whether she would stick with the Red Cross, but wanted to give it a try.

“I ended up getting hooked and now I completely devote my volunteer time to the Red Cross.”

Navidad quietly explains that Jessie has cancer and that she was given just five years to live when diagnosed.

“I’ve been very blessed. I was told I had five years to live and I’ve passed that mark. Being a Red Cross volunteer has been so rewarding for me and for Navidad. The smile on people’s faces is what keeps us going.”