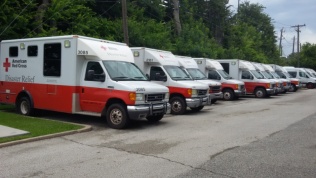 They came from around the country – white and red trucks converging on a single place: southeast Texas.  These are Emergency Response Vehicles (ERV), part of a nationwide fleet of Red Cross vehicles.

During large disasters, teams of two are tasked with driving ERVs from local chapters, where they reside, to the disaster.  Usually the team will stay with the ERV they brought from their home chapter for a couple of weeks. Then these out-of-towners will return home, but the ERV is likely to stay, assigned to a new team of drivers.

ERVs are designed for use in mobile feeding.  Food is placed in cambros which are sized to fit along the walls of the ERV.  The ERVs’ design makes it easy for a server to scoop up a spoonful of vegetables from one cambro, then move on to a second cambro filled with meat, and then add the rolls, chips, gravy, etc which will make the meal complete.  A large window on the side is used to deliver clamshells filled with food to waiting disaster victims.

The ERVs also are used to deliver bulk items, such as coolers, clean-up kits, bug spray, and water, directly into affected neighborhoods.

But what happens to the ERVs when they are no longer needed at the disaster location?  Before they are released from service, they must be checked for operational readiness and any problems must be fixed.  No one wants a break-down on the potentially long drive back to home base.

Two types of checks are made to each ERV.  The first is a technology test.  Do the radios work?  Are the speakers operating as expected?  Is the public address system clear?

The second is mechanical.  “We look at the safety factors first,” Rob Foye, a Red Cross Transportation Manager, explained.  “A complete inspection is done when each ERV comes in and another before each leaves.  Each ERV is looked at from radiator cap to tail lights.”

Oil changes.  New batteries.  Tires.  Transmission overhauls.  Body work after accidents.  “We oversee everything from a $5.00 light change to a $9,000.00 repair job,” Foye says, listing the many things that fall under his purview.

To handle the work, Foye utilizes a Mechanics Emergency Response Vehicle (MERV).  Four are stationed around the U.S.  “It’s a giant tool box,” he explains.

In response to the Texas floods which started in late May, 66 ERVs were used for the response.  Vehicles from all over the U.S were driven to Texas…some traveled more than 1,500 miles to assist with the response.  Foye and his MERV arrived on June 3.  They will be among the last to leave the disaster headquarters.  They’ll leave after the last ERV has been inspected and certified as being road-worthy.

Would you like to know more about Red Cross fleet management and ERVs?

One thought on “KEEP ‘EM MOVING!”