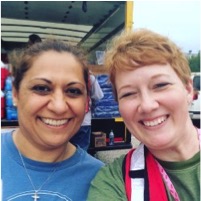 By Michelle Hankes
In my work with the Red Cross, I have had the opportunity to work with hundreds of volunteers. Many of them have been volunteering for years and love to tell me stories about their work in the field, the people they’ve helped and the lives they’ve changed. Listening to them, I can hear their passion for serving others. I ask them how they started out with the Red Cross, and nearly every single one of them will say the name of a national disaster as if it was an old acquaintance: Katrina, Gustav, Sandy.

Many of our most devoted volunteers found the Red Cross because they heard the call to help in something meaningful. We call these people who appear at the Red Cross office during disasters with an offer to assist “Event-Based Volunteers.” They haven’t gone through training or background checks (yet), but are willing to roll up their sleeves and be pitch in. While they can’t do roles that are client facing until they receive training, there are many other things that they can do to share the load with our regular volunteers, but this is how the spark for the mission is ignited.

In Houston, TX, I met one of these event-based volunteers as I visited a bulk distribution site where cleaning supplies, rakes, tarps and water were being passed out to victims of the Spring 2016 floods, many of whom had only just recovered from the Spring 2015 floods. I couldn’t help but notice this woman with a dazzling smile who greeted every family who drove into the parking lot, then carried cases of bottled of water to each car. It was blazingly hot and humid, but she never stopped and never lost her spirit.

Her name was Mitra Khalili. She and several of her fellow parishioners from Lakewood Church had offered their services to the Red Cross. “I was drawn to this church because it is so active in mission work. I’ve found happiness feeding the homeless and being of service. I was called to do this by my faith.”

Mitra understands what it’s like to have everything and then nothing. Her grandparents were from Azerbaijan, once part of Russia, who moved to Iran with their young children. Her father grew up to become a leader in construction, sending his older children to the United States for school during the reign of the Shah, then the regime crumbled, separating the family. Eventually Mitra’s father sold everything he had left after their home was nearly destroyed and was able to send her to family living in Austria then ultimately to rejoin her siblings in the United States.

She was a young teenager in a strange country with a new language. She experienced a culture shock that made her depressed and lost. “It wasn’t until a friend introduced me to her church that I started to make friends and feel useful. I was miserable until then.” She spent many years working in retail and learned that providing good customer service was very similar to being a counselor. “I found I liked to help people, so I became an interpreter for a call center for customers who speak Persian.”

In her spare time, she volunteers with her church, feeding the homeless in the Houston area and preparing for her first mission trip. She claims that those she serves always seem to serve her back in their gratefulness. Earlier this week, her church put out the call for her to volunteer to help with the floods, but she was scheduled to work.

“My father is 84-years-old, and his cancer has kept him homebound. He spends his days watching television, and he saw the images of the floods and the people who lost everything. He told me that making some money was secondary to serving these families. He said he couldn’t go but I could, and that he was very proud of me. I knew he was right, so I came to help.”

And that is where I met Mitra. She had a smile for everyone, and before I knew it, her contagious joy had me putting down my camera to help her carry water to cars. “What I love best volunteering with the Red Cross is the teamwork. I can’t wait to become a full volunteer so I can be an interpreter for clients.” Mitra speaks four languages, so her skills will be valued. Her skill in listening and caring will be valued even more.

I asked her if she had any words of wisdom for other people who might want to volunteer. That beautiful smile lit up again, and Mitra was quick to respond. “Love everyone. You don’t know what they’ve gone through. You don’t know their story. They just need your love.”

Hundreds of new volunteers have rallied to the Red Cross disaster relief operation here in Houston just like Mitra. They are learning from our experienced volunteers in how to provide shelter and food and care, and those of us that have been around are remembering how we found our passion as we watch them turn into the heroes they were meant to be.

Welcome to our Red Cross family!