Big, beautiful and stocked with everything you can think of to perform on-site automotive repairs, the maintenance emergency response vehicle (MERV) stood almost as proud as its senior mechanic and American Red Cross National Fleet Operation manager, Rob Foye.

Surrounded by multiple Red Cross emergency response vehicles (ERVs) in Vidor, Texas at the Southern Baptist Convention field kitchen, Rob was all too pleased to give a tour of his MERV.

“We have motor oil, transmission oil, light bulbs, door locks, door handles, windshield
wiper blades and light bulbs and fans, just to name a few things,” he said with a smile and a thick Boston accent. 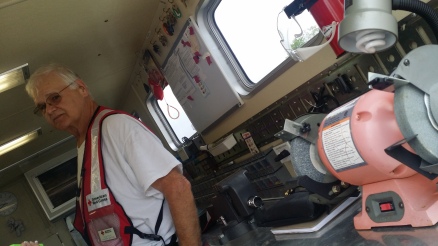 “Over here is my computer and printer so I can stay on top of our records and communicate with the national office. We don’t want even a moment of downtime for our ERVs if we can help it. Downtime means we don’t get food and important recovery items to the people who need it.”

A Massachusetts native who calls Nashville, Tennessee, home, Rob is responsible for one of four MERVs in the country—all created to ensure ERVs on a large disaster operation like the Southeast Texas floods are 100% ready to perform their work. Each day, he and his team check and repair minor items like tires, tail lights, head lights, interior lighting and more. The operation in Southeast Texas has required the use of 10 – 12 ERVs working on a regular basis to deliver aid to flood victims, so Rob’s been pretty busy.

Rob’s Red Cross MERV resides under his care in Tennessee. The others are located in San Diego, St. Louis and South Carolina. All four MERVs were once emergency response vehicles repurposed for their new, important task.

Rob’s was converted from ERV to MERV in 1996. “It’s been deployed to areas hit by Hurricane Katrina, Superstorm Sandy, Oklahoma tornadoes…it’s been everywhere,” he said.

During his time with the Red Cross, Rob has run warehouses, performed administration work and led logistics during flood and storm responses. A man of many talents, Rob is a certified automotive mechanic who spends his non-deployment time in Tennessee as a Red Cross Transportation manager and a chef for Marriott International. Regarding disaster response, Rob said “When I get the call, I hop into the MERV and go.”

Walking through the MERV and adjusting some of the tools inside, he explains why he adds disaster response automotive repair to his already-full plate. “Helping people,” he says matter-of-factly. Then he thinks again. “The people that we help are more important than me sitting home and watching TV. Who wants to do that?”